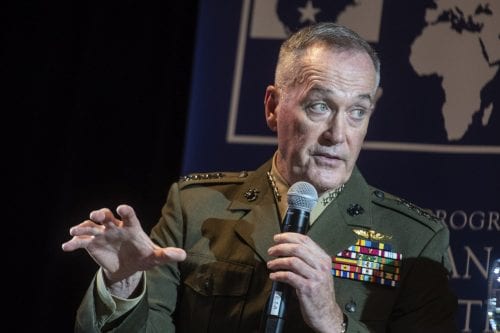 Professor Peter Feaver joined Gen. Dunford, Chairman of the Joint Chiefs of Staff, in conversation to discuss the U.S. military in a time of geopolitical strain.

More photos on the AGS facebook page.
Jump to news articles about the event.

U.S. military forces will not be involved in denying a caravan of Central American immigrants entry to the country, the nation’s highest ranking military officer said Monday at Duke.

“We are providing enabling capabilities,” Chairman of the Joint Chiefs of Staff Joseph F. Dunford Jr. said during a campus visit. “There is no plan for soldiers to come into contact with immigrants or to reinforce Department of Homeland Security as they’re conducting their mission.”

Dunford spoke to political science professor Peter Feaver, director of Duke’s Program in American Grand Strategy, and an audience of about 300 in Penn Pavilion. The talk, the fall 2018 Ambassador Dave and Kay Phillips Family International Lecture, covered topics ranging from the current strategic environment faced by the U.S. military to civilian-military relations. Dunford is the principal military adviser to President Trump, the Secretary of Defense and National Security Council.

“The soldiers on the border right now know exactly what they are doing, know why they are doing it, and have the proper training to accomplish what we are asking them to do,” Dunford said.

Assessing the greatest challenges faced by the U.S. military, Dunford asserted that the focus of the United States has shifted since 2015 from “four plus one” — the prioritization of China, Russia, North Korea and Iran as state actors and of violent extremism as a non-state threat to “two plus three,” which prioritizes the importance of China and Russia.

Competition from Russia and China constitutes a substantial military challenge to the United States in five domains — land, sea, air, space and cyberspace. The two countries are seeking ways to disrupt the United States’ ability to project power; to send as many forces, material and equipment as possible rapidly around the world; and to operate freely in any given region. Dunford said that it is the strength of the United States’ network of allies that has been built up since World War II and the United States’ ability to project power when and where necessary that will allow the country to succeed in confronting these threats. Dunford noted that over the past three years, the North Atlantic Treaty Organization (NATO) has undergone a transformation in organizational structure and capability development to act as effective partners with the United States in facing these challenges. At the same time, Dunford has acted as a “military diplomat” to increase communication, transparency and coordination in crisis management with his Russian and Chinese counterparts. Appointed by President Obama in 2015 and reappointed by Trump in 2017, Dunford served two presidents with different visions and governing styles.

“The national security decision-making process reflects the individual who makes decisions,” Dunford said. “The president can get advice from whoever he seeks advice from in whatever venue he decides.”

“I play a unique role in interfacing between our elected political leadership and those in military uniform,” Dunford said. Despite the administrations’ differences, Dunford feels his service as a military leader is consistent.

Dunford expressed concerns regarding the gap between the military and society because only 1 percent of the population serves while most Americans have no personal connection to the military.

“That should be a challenge we take on,” Dunford said. “We work for the American people and we’re conscious of that. We think they should understand what we’re doing and why we’re doing it.”

This event was also covered on:
ABC News: On election eve, Trump continues to play up military’s role at border
CNN:  Joint Chiefs chair says soldiers will not be involved in denying border entry to migrants
Defense.gov: U.S. Benchmarking Capabilities Against China, Russia, Dunford Says
The Duke Chronicle: Chairman of the Joint Chiefs of Staff says there is ‘no plan for soldiers to come in contact with immigrants’
Military.com: Pentagon’s Competition with Russia, China Is No Cold War, General Says
Reuters: U.S.-North Korea Talks Could Affect U.S. Military Posture in Korea: Dunford
Today at Duke: Joint Chiefs Chariman: US Military will not be involved in denying caravan
The Wall Street Journal: Border Troop Deployment Rises Again, to Nearly 8,000
The Washington Times: Joint Chiefs chair: Border troops won’t be ‘denying people entry’ to U.S.

Comments are closed, but trackbacks and pingbacks are open.