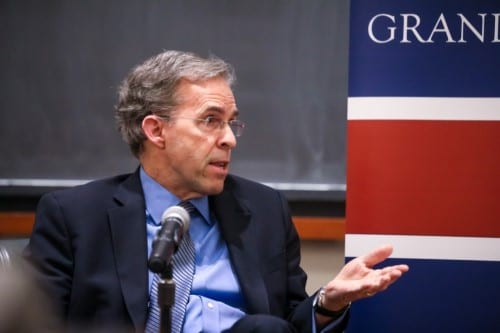 D-Day at 75: The Rise of American Character

Photos from the event can be viewed here.

On February 12th, 2019 Pulitzer Prize winning author and historian Rick Atkinson discussed D-Day’s 75th anniversary and the rise of American character with Professor Peter Feaver. Much of the conversation focused on Atkinson’s famous Liberation trilogy which recounts the liberation of Europe in World War II. Atkinson reminded the audience of D-Day’s significance, referring to it as one of the most dramatic episodes not only in American history, but also in military history in general. He also referenced the absolutely massive number of people affected by the war, with an average of one death every 3 seconds over the 6 years of the war.

When asked by Professor Feaver about the significance of these events to today’s students, Atkinson was quick to note that the United States is a military country and has been at war in one form or another for the vast majority of its existence. Atkinson explained that World War II caused people to ask, “What am I willing to die for?” and an often more difficult question of “What am I willing to send my children to die for?” Atkinson recommended that everyone in the audience ponder these questions as well, because they may become important again soon.

He also discussed the importance of remembering the war accurately. He cautioned against the narrative that US victory was assured, reminding the audience that we were “as unprepared as a country could possibly be” and ranked 17th in global military power behind Romania. None of our military leaders had ever commanded a division or larger unit before. He took pride in accurately documenting mistakes that were made by all sides in his books. He explained that in war, when bad decisions are made, people die. For this reason, he concluded that it is critical that we avoid war when we can and learn from our mistakes.

The final segment of the conversation revolved around Atkinson’s new trilogy about the American Revolution, which is a subject Atkinson has always wanted to delve into.  The trilogy begins with his new novel, The British are Coming, which tackles the first 21 months of the Revolution. This book is expected in May 2019.