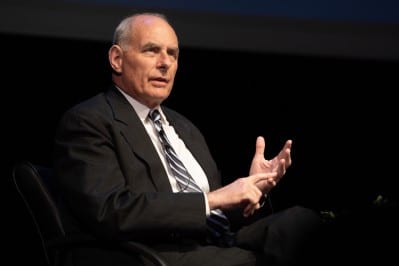 General Kelly primarily focused on three topics: his time as Commander of Southcom, his role as Chief of Staff and the dynamic between the military and the civilian government. General Kelly identified the drug trade as the major driver of crime in South America and increasingly Mexico. There is a high demand for heroin, cocaine and meth in the US. He touched on the current crisis in Venezuela, saying that the “solution in Venezuela has to be up to the Venezuelans.”

He then discussed his previous role as Chief of Staff. General Kelly viewed his position through a distinctly military lens. He believed it was his job to attend to “governance” and not “politics,” clarifying that he would work for any administration that asked as a way of serving his country. Therefore, he would provide President Trump with a variety of policy solutions on every issue, while consistently asking if solutions were good for the people and America and general. General Kelly would also ensure that President Trump used his authority appropriately and deferred to Congress when he should. Along these lines, General Kelly was asked his opinion on the national emergency declaration. He said that it would likely get wrapped up in the courts, and that “thank god we have this other thing called the courts.”

General Kelly said that the way he approached the Chief of Staff position was heavily influenced by his military background. For example, he said that the military did not emphasize personal ambition, and military personnel rarely took sole credit. It was ultimately about the success of the team, which meant he sometimes had to do things that were not in his interest. This attitude ran throughout the entire talk. General Kelly was hesitant to take a tough stance on specific policy issues, instead focusing on structural weaknesses and the importance of citizenship. 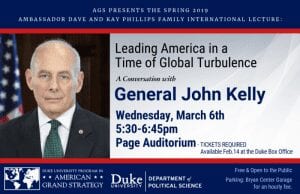