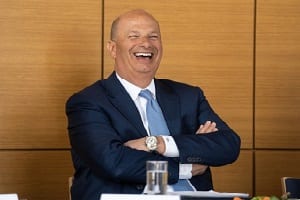 Ambassador Sondland started out by mentioning how his job requires lots of travel, being a quick learner, and a tough negotiator. He also mentioned that since he had just been appointed Ambassador to the EU last July, he was still learning the nuances of diplomacy. He also credited US Foreign Service Officers for their contribution to his mission and in representing American interests abroad. Professor Feaver then asked him a question regarding his opinion on the US Foreign Service Officers and bureaucrats in general, especially since President Trump has generally not portrayed bureaucrats in a particularly positive light. Ambassador Sondland responded by asserting that he actually holds the US bureaucrats he has worked at NATO and in his role as the US Ambassador to the EU.

Ambassador Sondland then addressed a number of other questions addressed to him. A senior asked him about his stance on the situation in Venezuela, especially with regard to the possibility of putting US troops on the ground. Ambassador Sondland replied by saying that he personally looked upon the possibility of direct US involvement in Venezuela favorably. He was also asked a number of questions about his experiences negotiating with EU representatives and why the US and the EU appear to be in a position of conflict. In response, he highlighted how, in his opinion, the EU is happy to take advantage of US help and support in multiple international relations and security issues but is not willing to make fair concessions in the domains of trade and security. He cited unreasonable EU tariffs and the EU’s refusal to try and integrate better with NATO as examples. He concluded by saying that the US still sees the EU as a natural ally and understands the disruption caused by Brexit, among other issues, but that the EU needs to engage in sincere good faith negotiations before any real progress can be made.