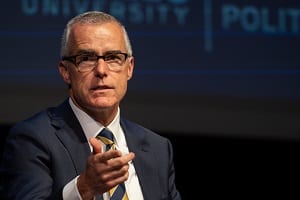 Andrew McCabe, former Deputy Director of the FBI, visited Duke University on April 9th to discuss his new book, The Threat: How the FBI Protects America in the Age of Terror and Trump. He began his talk by detailing the evolving positioning of the FBI in the security landscape of the United States, as well as his role in it. Starting off as a SWAT agent, he served as a criminal investigator looking at Russian organized crime when the attacks of September 11th happened. In his eyes, September 11th fundamentally shifted the strategy and priorities of the FBI, shifting from a broader to more targeted approach to thwart new threats. He spoke of technology as a force revolutionizing how the FBI evaluates threats, including the rise in prominence of Silicon Valley in security issues, and stressed the need for productive yet ethical cooperation between the public and private sectors. Furthermore, he elaborated on some of the more controversial cases of his career at the FBI, notably his investigation of former Secretary Clinton’s emails and the Russia investigation. On the topic of Clinton, he noted the immense public pressure on then-FBI Director Comey’s decision to announce their investigation’s results, stating that they “underestimated the toxic political climate of today.” For the Russia investigation, the difficulties in investigating his boss, navigating a public social media battle with President Trump, and the decision to call for a special counsel were discussed by McCabe.

To watch the full livestream of the talk, please visit the Duke Political Science YouTube page.