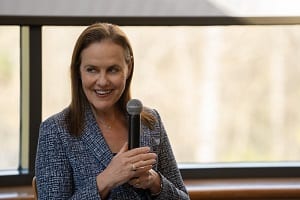 On Wednesday, April 3, Michèle Flournoy, Former Under Secretary of Defense for Policy, discussed her career and the United States’ role in the world with AGS Director Peter Feaver. In the wide-ranging talk, Flournoy provided her views on President Trump’s performance, the bipartisan consensus on foreign policy, and the importance of mentorship for the next generation of strategists.

Comparing the priorities of the Trump Administration with those that a Hillary Clinton administration would have faced, Ms. Flournoy identified the same issues—Russia, China, and the ongoing conflicts in the Middle East. However, she noted that Trump has approached them in a different way, pursuing unilateralism over working with American allies. Ms. Flournoy emphasized the need for a bipartisan consensus in favor of sustained military spending, a robust role for the United States internationally, and a recognition of our allies.

Discussing her own career, Ms. Flournoy highlighted how several mentors had provided her with advice and helped her pursue opportunities in national security. She founded the Center for a New American Strategy, a DC-based think tank, in 2007 with mentorship in mind, and she was proud to note that CNAS’ model of investing in interns and research assistants has raised the standard for professional development in the field. Her advice to current students? “Choose the boss, not the job.”