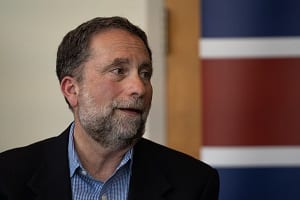 On Wednesday, April 10, 2019, Robert Satloff, Director of the Washington Institute for Near East Policy spoke at Duke, the day after the Israeli elections to an audience of 40 people. The Middle East policy expert began by discussing American grand strategy for the Middle East since President Bush and the September 11 attacks, contrasting the positions of Presidents Bush, Obama, and Trump. “America is running an experiment that it is in our interest to have a smaller footprint in the Middle East. We are now a decade into this approach. Is it right? Wrong?” Dr. Satloff said. “I think we are reverting a bit to a September 10 approach.” Dr. Satloff explained that the notion that America is better off diminishing its footprint in the Middle East is one of the rare matters of policy that receives significant bipartisan support. Dr. Satloff emphasized that when President Trump told the Congress that the U.S. should end wars and leave the region, he received a standing ovation by most members on both sides of the chamber.

Dr. Satloff noted that “there is a basic question: is America better off trying to invest its resources to address problems in the Middle East before they become crises or to protect ourselves from the export of those crises to the United States?” He also noted that America has a wider range of tools than the public often considers to be put to use in the Middle East. Dr. Satloff quickly transitioned into a discussion of Israeli politics and interpreting the results of the April 9 election, in which Benjamin Netanyahu captured a record fifth term as Prime Minister. Netanyahu’s Likud party won 36 seats and the opposition party, the Blue and White, led by Benny Gantz won 35 seats in the 120-seat Knesset. To serve as Prime Minister, however, Netanyahu needs a 61-seat majority which involves creating coalitions with ideologically similar parties. Dr. Satloff also put Netanyahu’s indictment in the context of political norms in the United States. Netanyahu is the first Israeli Prime Minister to be threatened with indictment, but some of his charges are for actions not considered criminal in the United States.

Dr. Satloff noted that the two main parties are in a dead heat politically as they each have approximately the same number of seats. Netanyahu has never had more than 30 Knesset seats. A 5-6 seat gain is particularly impressive and shocking given his legal problems. Equally remarkable, said Dr. Satloff, the opposition party achieved a steep jump in seats against the party of the Prime Minister of 10 years. Dr. Satloff explained that each party achieved success by essentially absorbing votes from parties within their basic ideological spheres of orbit. Netanyahu appealed to the more right-wing parties while liberals swallowed the votes of the Labour Party. For the first time, the Labour Party will have a single-digit seat count. Dr. Satloff concluded by answering questions on Jared Kushner’s work on a Middle East peace plan and the conditions necessary for achieving a successful peace in the region.