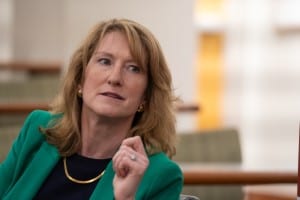 Lisa Disbrow, former Under Secretary of the Air Force, visited Duke University’s Program on American Grand Strategy on April 16th, 2019, where she discussed her time in service as both an Air Force officer and a civilian on the National Security Council as well as in the Department of Defense. She first talked in-depth about her experience working with AGS Director Dr. Peter Feaver on the Iran and later Iraq Strategy Reviews, in which she focused on the importance of interagency cooperation and collaboration as well as culture. “People at the highest level of government did not believe in their own or other peoples’ ideas,” she said, with regards to the feasibility of various options considered by the administration. She then discussed service at the DoD as both an officer and later an administrator, calling it a “culture of sacrifice” since the strategy planned by those at the White House and NSC are carried out by and directly impact the service members of the many branches of the armed forces. More salient to the current political climate, she examined the differences between nonpartisan career officials and political appointees. She said that, while agendas were important, an “underpinning of nonpartisan activity” drives policy-making and that career officials have an easier time speaking truth to power than political appointees. Lastly, she tackled broad strategy questions, discussing the shift towards drone warfare and away from nuclear weapons.