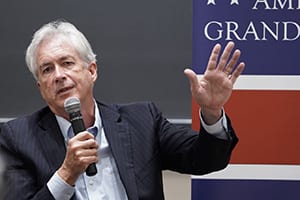 Read a quote from the talk at Said@Duke

On Tuesday, October 1, Ambassador William E. Burns joined Professor Bruce Jentleson for a conversation on his long career in diplomacy. Drawing upon his own experience in the State Department and in multiple ambassadorships, he shared insights as well as personal stories on the Iraq War, U.S.-Jordan relations, U.S.-Russia relations and the Iran nuclear deal. Ambassador Burns highlighted that diplomacy matters more today than ever before: as the world moves past the era of unipolar primacy, the U.S. is navigating a much more complex landscape and facing significant challenges beyond the capacity of any single state to handle, such as climate change. On that note, he encouraged more students to consider pursuing foreign service as a career.

Regarding U.S.-Russia relations, Ambassador Burns expressed pessimism towards the prospects of the relationship, emphasizing that a declining power can be as disruptive as a rising power and Russia remains a formidable player on the international stage. On the question of JCPOA, Ambassador Burns described the deal as one of the best available alternatives by then, and cautioned against the danger of the U.S. and Iran talking past one another with all coercion and no diplomacy. During the Q&A, he also discussed the rise of China and argued that it is unfeasible to contain China’s rise or to decouple the two economies, but U.S. should work with allies and shape the environment in which China rises.