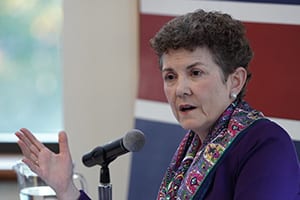 On Monday, October 28, Professor Audrey Kurth Cronin of American University joined Duke Professor Tim Nichols to discuss her new book Power to the People. In her talk, Cronin explained a shift in technological innovation following the Cold War and its implications for terrorism in the modern day.

During the 20th century, major innovations were top down. US and Soviet militaries developed new tanks, aircraft carriers, and nuclear weapons in an era of closed technological innovation. In the 21st century, changes are occuring in a more open environment. Non-state actors can innovate with artificial intelligence, cyber weapons, 3-D printing, and robotics.

This open environment isn’t entirely new. Anarchists in the late 1800s benefited from open innovation with dynamite; 20th century insurgent groups did the same with the AK-47. The power of modern technology in the hands of terrorists, however, is new. Cronin ended by emphasizing the role that government must play to prevent new technology from threatening US national security.