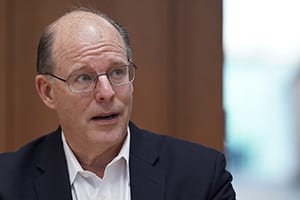 Peter Wehner, vice president and senior fellow at the Ethics and Public Policy Center, talked this week about the future of the Republican Party during a Duke Program in American Grand Strategy event. He worked in the Reagan and George H.W. Bush administrations prior to becoming deputy director of speechwriting for President George W. Bush. “Why don’t Republican politicians say to Trump, ‘We don’t like what you are doing to the civic and political culture of America?’ It’s because the base does not agree. The base is loyal to Trump, not towards conservatism,” Wehner said. “It is not an ideological sympathy that the base has towards Trump, because Trump has no ideology. Rather, it is the Trump style, built on a feeling of dishonor and resentment, that attracts the Republican base.”