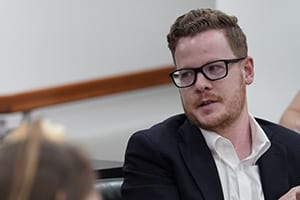 On Monday, October 14, 2019, Professor Simon Miles joined Dr. Timothy Sayle in a conversation about his recently published book, Enduring Alliance: A History of NATO and the Postwar Global Order. When it was formed, NATO was shaped and influenced by the lived experiences of World War II and World War I. Dr. Sayle described examples of leaders whose perspectives and mindsets were shaped by the wars, including President Dwight Eisenhower, French President Charles de Gaulle and General Maxwell Taylor. Through the story of Finlandization, Dr. Sayle outlined the main rationale behind NATO – so that states can work together to prevent smaller states from being isolated and controlled by those with greater military powers. Dr. Sayle characterized NATO as a “democracy insurance,” and emphasized that, despite all the changes happening in the world today, “geopolitical realities will endure.”

Additionally, Dr. Sayle highlighted several problems within NATO. He emphasized that NATO is a military solution to a political problem, so there is an inherent disconnect. Nonetheless, NATO has been successful for 70 years, and there is no good replacement to the alliance. Critically, Dr. Sayle asked the question: Should NATO states create a unified grand strategy together, or should NATO be subsidiary to the American grand strategy? This difference in opinion between Western European allies and the U.S. has created tensions both during the Cold War and in present day. In particular, trade and politics, when combined, can be especially dangerous. In today’s world, it will be difficult to justify American military presence in Europe when European states have become trade enemies. Dr. Sayle’s insightful arguments about NATO’s role in shaping postwar global order invoke further discourses about America’s grand strategy priorities going forward.