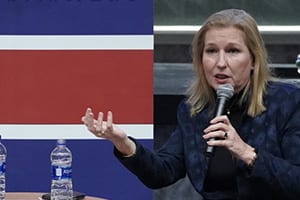 Tzipi Livni, former Minister of Foreign Affairs of Israel, visited Duke University’s Program on American Grand Strategy on October 23rd, 2019, to discuss her experience in Israeli politics and her experience advocating for a two-state solution. In a conversation moderated by Bruce Jentleson, Livni first talked about her experience as Foreign Minister from 2006 to 2009 under Prime Minister Ehud Olmert. She told the audience that she eventually left government “to create hope.” Jentleson and Livni also discussed her complicated experience with Israel-Gaza conflict. “It’s between bad options, the situation is complicated,” Livni told the audience. The talk wrapped up with Livni explaining her reasoning for supporting a two-state solution, which she called the best option for Israel. She told the audience that she respects the “legitimate aspiration” for a Palestinian state, but argued that both sides need leaders who are willing to pay the political price for an agreement. While she would not predict the final outcome of the recent Israeli election, Livni argued that the result was meaningful in rejecting any push to political extremes. “I believe that the last election sent a message that enough is enough,” she said.