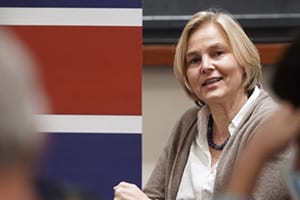 In her talk, Goedde explained how the peace movement of the 1950s gave way to the anti-war movement of the late 1960s. Early on, the peace movement endorsed non-violence. Through this strategy, they successfully pushed for the Partial Test Ban Treaty of 1963. Later activists diverged from the older generation as they came to embrace violence, however, linking their politics to de-colonialism.

Goedde drew two critical lessons from this era that apply to the modern day. First, we should embrace the middle—as anti-war activists turned radical and embraced violence, they were less successful. Second, advocating for peace requires skill and courage. The politics of peace are harder than the politics of going to war.