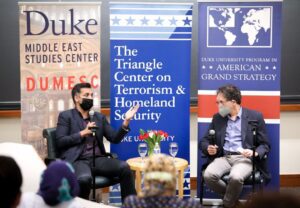 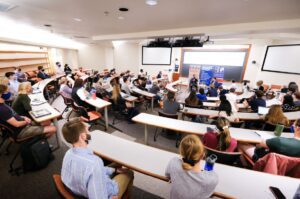 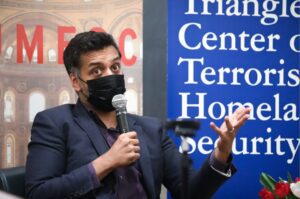 On September 9, the Duke Program in American Grand Strategy welcomed Wajahat Ali, an influential writer and leading Muslim American public intellectual, in conversation with Professor David Schanzer to commemorate the 20th anniversary of 9/11. Ali began by talking about his experience as a Muslim American college student in the immediate wake of 9/11, as he – along with other Muslim Americans – was thrust into a situation where he was forced to be a cultural ambassador for 1.7 billion people. He highlighted the feeling of being simultaneously a “citizen and a suspect” and a “neighbor and a foreigner.” He expressed how the immediate and lingering effects of 9/11 have impacted Muslims and other people of color in political, social, and cultural realms.

The discussion then turned to the U.S. response to 9/11, both at home and abroad. Ali noted that in the immediate wake of the attacks, the U.S. government and Bush administration did all they could to stop the backlash against Muslim Americans, but it was not enough. He highlighted how this was a profound impact for progressive change, as there was a realization among young Muslim-Americans (as well as Muslims around the world) that they had to get more involved to gain access to the gatekeepers and policy-makers in order to effect change. Ali also highlighted the “us vs. them” dynamic between Islam and the West that emerged in the years following the initial attack. He spoke about how as Islam became defined by violent extremists, the West became defined by an anti-Muslim war, which emboldened extremists on both side. He brought this discussion to the current political climate, and how the treatment of whiteness vs. the treatment of minorities is treated in American politics and culture.

Ali wrapped up the discussion with a reflection on 9/11 and the American political psyche. He spoke about how 9/11 revealed to us and the world that America is vulnerable, and revealed our anxieties. He called the attack and the subsequent political impacts an “x-ray at our anxieties, our hubris, and our vulnerabilities” that revealed our weakness, asking the audience to reflect on the idea that the U.S. response showed how we are willing to give up the civil liberties of the marginalized to feel free.