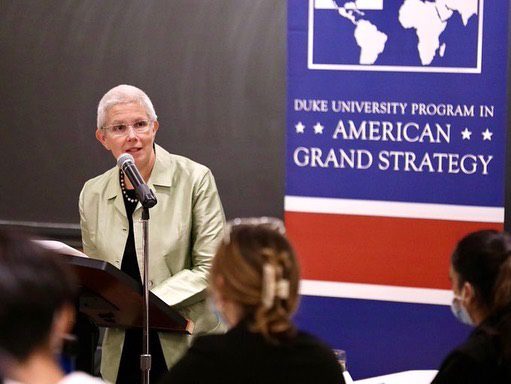 Richardson starts the event by showing a brief video, China: How Surveillance Works in Xinjiang. Although it’s subtitled, the audio drops out in our event recording. The video is available to watch on Youtube with sound.

See more photos from the event on the AGS Facebook page.

On Wednesday, October 27, Dr. Sophie Richardson addressed the AGS community with a stirring speech about the Uyghur crisis in China and the work Human Rights Watch is doing to protect their human rights. Since 2006, Dr. Richardson has served as the China Director at Human Rights Watch, an international NGO that conducts research and advocacy on human rights issues around the world. Dr. Richardson has published extensive research on human rights and political reform in China. Dr. Richardson has also testified to the Canadian Parliament, European Parliament, and the United States Senate and House of Representatives. She is the author of China, Cambodia, and the Five Principles of Peaceful Coexistence.

Dr. Richardson began the event by playing a video introducing the Uyghur human rights crisis taking place in Xinjiang Autonomous Region, China. She then addressed the history of the Chinese government’s crackdown on Uyghurs, the current situation, and why the government is being accused of crimes against humanity. She spoke about “political re-education camps” and the mass arbitrary detention of Uyghurs, as well as the campaigns by the Chinese government to crack down on the Uyghurs. She highlighted the trend in the Chinese government seeing ethnic and religious minorities as threats to national security, and how this has led to a concerted effort to limit minorities like the Uyghurs, justified as economic development and a response to violence or extremism.

She then spoke about the steps Human Rights Watch recommends to combat the Uyghur crisis. She called for an independent human rights investigation, for companies to stop doing business in Xinjiang, and highlighted the ways in which Human Rights Watch is supporting the Uyghur community by reconnecting families and providing counseling in the Uyghur language. Dr. Richardson highlighted in particular the role that individual consumers could play in forcing companies to follow through on their human rights due diligence.

At the end of the event, Professor David Schanzer moderated a Q&A with Dr. Richardson. Questions from the audience covered a range of topics, including how the U.S. could work through the United Nations, the role of international institutions in human rights promotion, and how the U.S. can address the Uyghur crisis in context of the U.S. relationship with China.