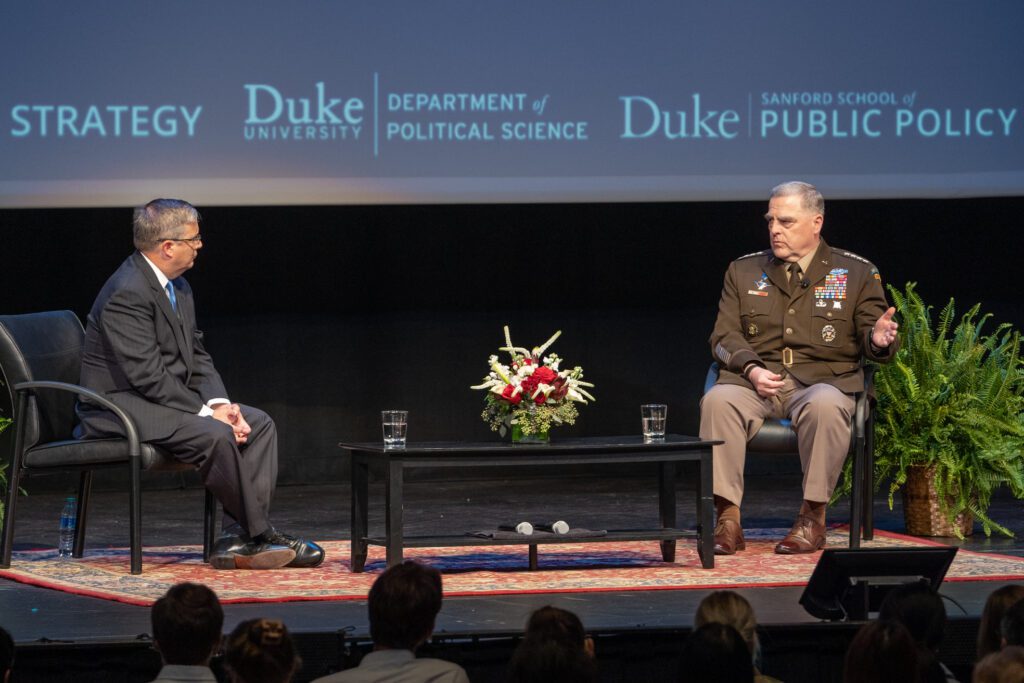 More vent photos can be viewed on the AGS Facebook page.

General Mark A. Milley, the Chairman of the Joint Chiefs of Staff, joined Professor Peter Feaver in a discussion of U.S. national security and defense. The discussion the General’s personal views on ser recent political controversies, and current and future threats to the U.S. and U.S. Armed Forces. General Milley referred to his parents’ service in World War II as an inspiration for his own career and his views on leadership, encouraging all to lead a life of service whether it be in the military or elsewhere. He referred to military service as a calling, and to the military as a meritocratic organization designed to protect Americans’ freedoms. Speaking of leadership more generally, he advised: “When you lose your moral compass, when you lose the ability to see right from wrong…when you lost that, you lose everything.”

General Milley and Professor Feaver discussed the role of the Chairman of the Joint Chiefs of Staff as principal military advisor to the President, Secretary of Defense, and National Security Council; General Milley emphasized the principle of civilian control of the military and the need for military leadership to remain apolitical. He noted that the Chairman of the Joint Chiefs is in the chain of communication and the chain of advice, but not the chain of command. He is legally obligated to give his “best military advice” to the President, and the decision-making power is held by the President.

In discussing recent political controversies, General Milley was candid and firm in sharing his thoughts on the Lafayette Square protests, his calls with Chinese officials during the Trump administration, and the withdrawal from Afghanistan. He called the Lafayette Square incident a political act for which he had to apologize, stating unequivocally that the Chairman of the Joint Chiefs should not be involved in domestic politics. The General also asserted that, as Chairman, it is his responsibility to maintain contact with his counterparts in foreign militaries. His calls with Chinese officials are part of normal procedure and served to maintain strategic stability. Finally, General Milley attributed the messy withdrawal from Afghanistan to a series of strategic – not operational or tactical – failures over the past twenty years, including the failure to capture bin Laden early on, the decision to invade Iraq, and the U.S.’s inability to cut off Pakistan as safe haven. He concluded by saying, “War’s a messy thing. War’s a brutal, vicious, violent thing.”

The General then outlined his views on threats that the U.S. is facing and will be facing in the future. He views “threats” as nation-states and non-state actors that can do physical harm to Americans, noting particularly China, Russia, North Korea, Iran, and terrorist organizations. Of these threats, the rise of China, in terms of economic and military power, is the most serious in his view. General Milley expressed how he was more concerned with this than Russian military maneuvers or rising domestic instability across the globe, although the U.S. military closely watches as these other events unfold. To maintain American military primacy in the face of the threat from China, General Milley suggested that the U.S. must invest heavily in research and development and acquisitions, especially in the domains of artificial intelligence, robotics, and quantum computing. Furthermore, he spoke about the Pentagon’s focus on adopting a strategy of “integrated deterrence,” which looks to integrate all domains, including U.S. military capabilities, alliance networks, and all elements of national power (including economic and diplomatic). Ultimately, General Milley emphasized that the U.S. must use this to avoid Great Power war, and Americans today must reflect on “the level of destruction, intensity, violence, [and] unmitigated disaster of WWI and WWII.”