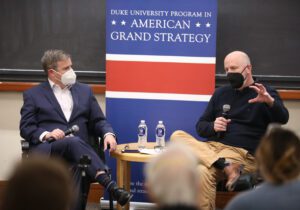 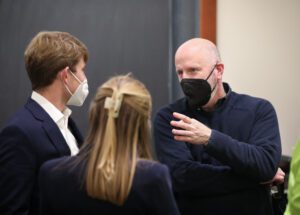 David French joined Professor Peter Feaver for a conversation on foreign policy, national security issues, and what the future holds for the GOP.

David French joined Professor Peter Feaver on Tuesday, February 1 for a conversation on foreign policy, national security issues, and the future of the Republican party. Mr. French is the 2022 Egan Visiting Professor at Duke’s Sanford School of Public Policy, a prominent American political commentator, and former lawyer. A theologically conservative Christian, Mr. French spent his earlier career working on religious-rights issues, before serving as a judge advocate in the U.S. Army Reserve, and then switching to a career in journalism.

Mr. French began by tracing his moderate-conservative ideology to his upbringing during the Cold War. He also discussed his decision to join the Army Reserve at the age of 35 after supporting the Iraq War and deploying to Iraq in 2007. Through his work as a military attorney, he developed expertise in the law of armed conflict.

Mr. French then explained his decision to leave the GOP in 2016 in response to the party nominating Donald Trump for President. French believed that in order for conservative policies favoring individual liberty and responsibility over central government to be effective, the party’s leader had to be someone of strong moral character. After witnessing Trump’s primary campaign, however, French did not believe Trump met those standards, and therefore made the decision to oppose Trump in the general election.

During the moderated and discussion and Q&A, Mr. French discussed ideological trends and potential paths forward for partisanship in U.S. politics. In discussing the increase in tension and animosity between liberals and conservatives, Mr. French pointed to the increase in negative polarization as a potential reason. Negative polarization, according to French, is the phenomenon of supporting a particular ideology because of a hate or fear of the opposite side. This allows partisans to support seemingly contradictory ideas. Mr. French gave the example of prominent Republican members of Congress coming to the defense of President Trump supporting Vladimir Putin of Russia and Kim Jong-Un of North Korea at various points during his presidency.