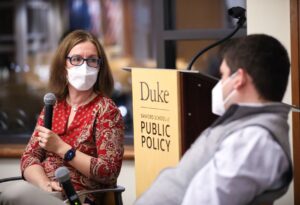 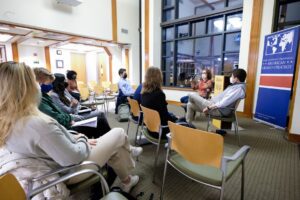 On Tuesday, February 8, Professor Theodora Dragostinvoa led a fascinating discussion on the cultural underpinnings of small states in the Cold War. She began with a short lecture, then joined Dr. Susan Colburn in a moderated discussion and Q&A. Prof. Dragostinova, originally from Bulgaria, noted the cultural dichotomies and political realities that greatly differ between former Soviet states. Often overlooked in the modern discourse of Great Power competition, she recenters the discussion on how best to achieve hegemony through what she defines as cultural diplomacy. The modern perception of Cold War relations typically relies upon notions that smaller states within the Eastern Bloc merely are a security buffer and ideologically mimic the Soviet Union. Prof. Dragostinova, however, asserts that because the Soviet Union expended so many resources, both financially and militarily, into the coordination of the Eastern Bloc, the only true avenue where small states maintained their autonomy and heritage was through the cultural arena. Culture and policy represented a dichotomy that smaller states could exploit to generate greater international recognition and reputation. For the Bulgarians, this meant exporting their cultures to primarily developing nations across the world. In her book, Prof. Dragostinova’s focuses on India, Mexico, and Nigeria.

Within these three developing nations, she contextualizes the Bulgarian infusion of international diplomacy to create their own form of cultural resistance to the Soviet Union. By the 1970’s, Bulgarian leader Todor Zhivkov was renowned for being the most traveled Eastern European leader in the Soviet Bloc and his daughter, Lyudmila Zhivkova, is credited with the growth of Bulgarian arts and culture internationally, in particular with her travels to Mexico, Nigeria, and India. By the 1980’s, there were 82 organizations within India promoting Bulgarian culture. Similarly, Bulgarian architects landed a massive Nigerian contract for building their National Theater in Lagos, which later became the site of a greater cultural exchange between the two countries.

In contrast to a more globalized and Westernized view of cultural exchange today, Dragostinova argues that the roots of Bulgarian cultural diplomacy were a “top-down,” illustrating the importance of communist elites in the politics of culture. She also highlights the benefits of being small. Part of the reason why Bulgaria became embraced internationally as an exporter of culture is for its historical similarities to other developing nations in the world as a smaller power. This allowed Bulgaria to cultivate its own image of national identity. Overal, Prof. Dragostinova’s lecture provided students with a vital new understanding of how cultural diplomacy functioned in the smaller, less influential states of the Soviet Union, and also gave a heightened awareness of the importance of cultural exportation for soft power and the advent of a renewed Great Power competition in the 21st century.