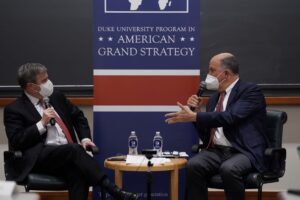 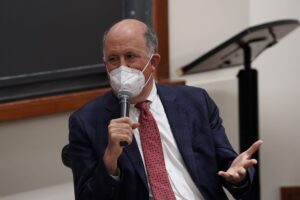 On Thursday, February 10th, Michael Abramowitz, former journalist, director of the U.S. Holocaust Memorial Museum, and current President of the Freedom House, spoke to Duke’s American Grand Strategy Program. The discussion was moderated by Professor Peter Feaver and focused on the trend of declining freedom across the world.

To begin, Abramowitz described the Freedom House’s work. Self-labeled a “do-tank,” the Freedom House informs about threats to democracy, coordinates with activists, journalists, and other civil society organizations to promote democracy. By engaging with activists in various countries, the Freedom House helps support local democracy efforts. Each year, the “do-tank” releases an annual report rating the extent governments respect the civil liberties of their people. Abramowitz termed this report “the Michelin Guide for countries” as it groups nations as free, partly free, or not free.

Based on recent trends in these reports, Abramowitz argued that the world is in a “democracy recession.” In the last 15 years, Abramowitz contends that there has been a decrease in freedom, yet the exact causes are unclear. Some potential reasons could be the Iraq War, the 2008/9 financial recession, and the great Chinese firewall and surveillance state. Specifically, Abramowitz noted that key allies of the United States are backsliding in terms of democracy, and, consequently, less than 40% of humanity now lives in a free country.

During the Q&A, Abramowitz responded to a wide variety of questions—ranging from the relationships between other NGOs and the Freedom House, to overarching themes about the general decline in democracy, to the impact of technology on freedom. Particularly interesting was Abramowitz’s analysis of why U.S. freedom was on the decline. In his opinion, America is becoming less free for three reasons: the influence of special interests, problems with equal justice, and political polarization. Further, the power of the U.S. is dependent on its relationships with its allies—something that may be backsliding along with freedom ratings. If the U.S. wants to remain powerful, robust relationships with its allies must be prioritized.

Another thought-provoking point was when Abramowitz discussed the future of both democratic and authoritarian countries after the pandemic. Abramowitz worries that restrictions that were initially necessary may become institutionalized. While important, surveillance technology developed and employed during the pandemic could restrict freedom if it stays in use.
Yet, despite all the existing challenges, Abramowitz is still hopeful. Arguing that the natural feeling in humans is for “freedom,” Abramowitz believes that various counterrevolutions may be brewing.