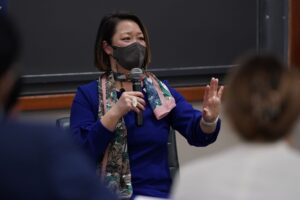 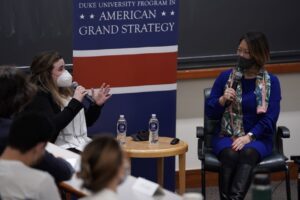 On Wednesday, February 16, AGS Graduate Fellow Rebecca Dudley was joined by guest Jean Lee in a discussion on North Korea. Among many engagements, Ms. Lee is a resident expert on North Korea at the Woodrow Wilson Center. Her expertise in the nation stems from her days as a wire reporter for the Associated Press, when she was allowed by the North Korean regime to set up a bureau in Pyongyang. It was an unprecedented act for an American news agency.

Ms. Lee was able to provide a window into a world not well understood by most Americans. By living in and reporting on North Korea for an extended period of time, she was able to explain what North Korea really looks like underneath its carefully-crafted, propagandized surface. To the extent she could under what is the most oppressive surveillance state on Earth, she sought out authentic conversations with North Koreans, to try to get a better idea of what life was like under what she characterized as “the mask” that most Americans associate with life in North Korea. Our discussion with her ranged widely, from the national security threat posed by Kim Jong-un’s pursuit of ever more powerful weapons to a critical comparison of North Korean and South Korean nutrition. She spoke about the mythic views held by North Koreans about their leaders, the importance of their national holidays, North Korea’s missile program and testing, and her views for what North Korea’s role will be on the global stage in the long-run.