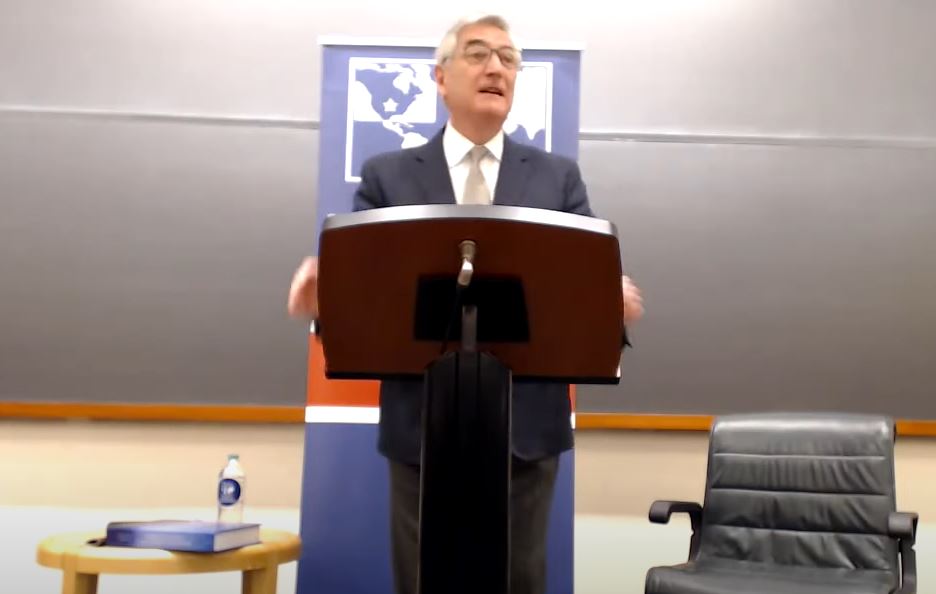 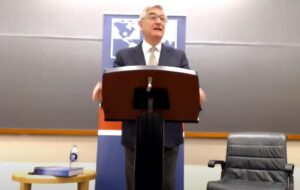 On Tuesday, April 5, Dr. Christopher Hancock visited the American Grand Strategy Program to discuss his book Christianity and Confucianism: Culture, Faith and Politics. Among many appointments throughout his career, Dr. Hancock has served as Dean of Bradford Cathedral and chaplain of St. Peter’s College Oxford. He currently is a Founding Director of Oxford House Research and a visiting professor at St. Mary’s University in London.

Dr. Hancock first introduced himself, his research, and his book. Currently, his primary area of study is the historical relationship between Christianity and Confucianism. Through his work at Oxford House, he applies lessons learned from history to high level engagement with China today. In fact, his interest in China dates back to his childhood in London, when he was surrounded by missionaries who had served in China during the early 20th century.

He touted his book as “the story of a difficult conversation” between the Confucian and Christian worlds, one marked by “inherited abuse.” Yet, he also asserted that healing only comes through moving past politically convenient denial towards acceptance of mutual fault. The first two chapters of his book cover the lives and teachings of Confucius and Jesus. The subsequent chapters cover episodes of “intense dialogue” between the two worlds of Christ and Confucius. He laid out four takeaways from his study: first, that cultural exchange occurs through a multifaceted mechanism that includes such material things as maps, traded goods like porcelain, silk, and tea, in addition to the interactions between merchants. Second, there is a compatibility between Confucian and Christian philosophy, as both tackle timeless questions regarding the organization of society, the nature of death, love, learning, and how to live the good life. Third, China has historically shaped the West through waves of Sinophilia as recently as the missionary movement in the 20th century. Fourth, there is a commonality of lived experience around the globe. Chinese people deal with the same questions surrounding life, suffering, pain, and the afterlife that those of us in the West. For example, French existentialism was lauded in 20th century China as they dealt with similar questions of national decline.

Q&A followed this presentation, covering topics such as how to sell mutual acknowledgement in East and West, Trump’s claims that persecution of Christians in China had massively accelerated, what to do about the CCP’s hardening denial of commonality with the West, what caused China to crack down on religion and expression in the last decade, and why Chinese Christians don’t fight back against repression.
After this, Dr. Hancock shared a few more reflections on the commonalities of Christianity and Confucianism to hint at their application to geopolitics. If one chooses to believe that these two worldviews impact societal behavior, then they can be a powerful analytical tool for geopolitics. Both traditions deal with questions of the relationship between people and God, heaven, and each other. Both traditions are global, and both evolve and mutate over time. Sometimes they cause events and other times, their evolution is an effect of something else. Lastly, both Jesus and Confucius were rebels who challenged their societies via critical examination. It is to the detriment of the East or West to tout their societies as superior or complete.

A final Q&A followed these remarks. Dr. Hancock emphasized the need for western people to sometimes have more perspective in the face of withering criticism from China. He argued that the actions of the Chinese government today are the legacy of what the West has taught China over the centuries. He also argued that Chinese youth are not totally brainwashed by propaganda and have been successfully globalized like their peers in the West. Instead, they remain vigorous patriots and their rhetoric towards the West, however painful, contains pieces of legitimate criticism. Lastly, Dr. Hancock re-emphasized the point that Christianity and Confucianism still have the potential to evolve further and influence future interactions, just as their founders intended.