Professor Miles welcomed Professors Andrew Preston and Christopher Nichols to discuss the rethinking of American grand strategy as detailed in their new book. 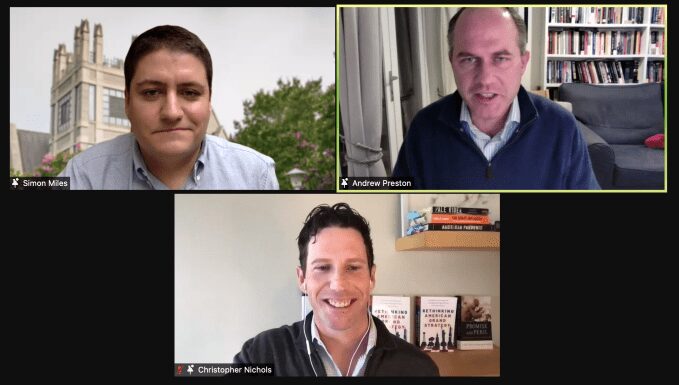 Christopher Nichols is the Director of the Oregon State University Center for the Humanities and an Associate Professor of History at Oregon State University. Andrew Preston is a Professor of American History at the University of Cambridge who specializes in the history of American foreign relations. Together, they edited the new book Rethinking American Grand Strategy, which aims to rethink (but not reinvent) the study of grand strategy by integrating its traditional military and diplomatic elements with newer elements that have not been broadly considered a part of grand strategy, such as public health. They visited Duke University virtually on September 29, 2021 in conversation with Professor Simon Miles to discuss insights from the book.

Professor Preston first spoke about the decision to write the book and why the array of hard and soft power tools at its disposal makes the United States a great case study for a broadened view of grand strategy. Professor Nichols then outlined some of the key contributions of the book. Some chapters recast key figures such as F.D.R. or George Kennan, while other chapters examine the implications of issues such as public health, public opinion, and social movements for grand strategy. Overall, the book combines work from long-time grand strategy scholars with other scholars whose areas of expertise have not been traditionally associated with grand strategy.

Professors Nichols and Preston then answered a series of questions from Professor Simon Miles and from the audience. Asked whether grand strategy must always be planned in advance as opposed to an emergent phenomenon, Professor Nichols spoke of his concept of grand strategy as an epistemology: a way to select and structure knowledge regarding complex realities. A few questions focused on who can have a grand strategy: can a small state with few strategic tools at its disposal have one? Professor Preston said that he has never been able to satisfactorily answer this question, though a student in the audience brought up North Korea as a smaller country that he agreed absolutely has a grand strategy. Asked how the insights of the book might help policymakers, Professor Preston encouraged them to think more broadly about both the means and the ends of grand strategy: there are more than just militaristic and diplomatic means available, and the ends can be broadened to answering the question, “What kind of international society do we want?” Overall, the event encouraged attendees to think more broadly and question their preconceived notions about grand strategy.