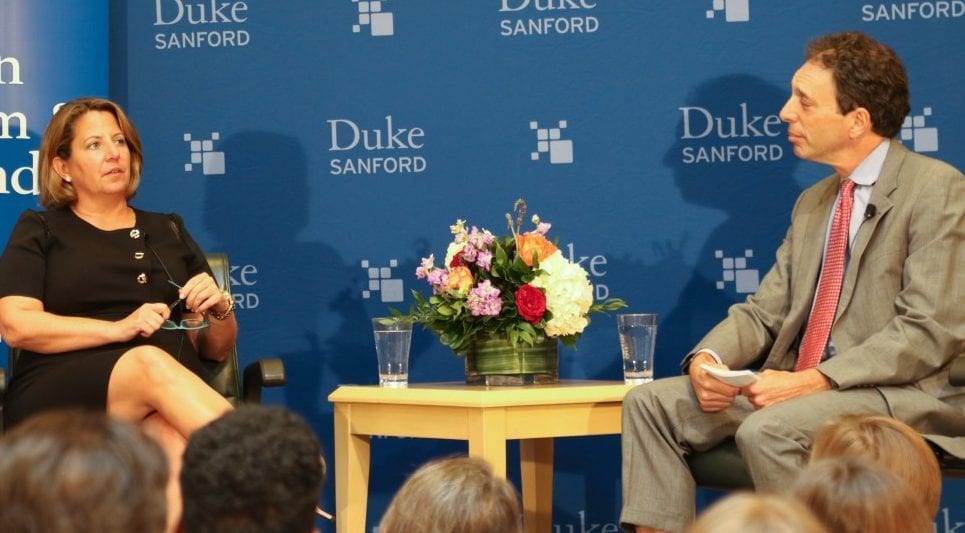 Counterterrorism in the Trump Era

“Although the Sept. 11 attacks occurred 16 years ago, they are still fresh in the minds of many Americans, including Lisa Monaco, who served as chief counterterrorism and homeland security adviser to President Obama.

9/11 changed the way we operated, it changed our legal structures, it forced us to build a strong apparatus against terrorism,” she said. “After 9/11, we merged departments to work together to build the strongest possible base. We required strong partnerships with the tech industries especially.

For the people who work for special defense forces and intelligence, the most recent anniversary of 9/11 marked a success because there hasn’t been an attack of a similar magnitude in the years since, Monaco said. She compared American and European intelligence operations, noting that European countries were never forced to adapt their intelligence techniques since they had never experienced the scale of violence that America did on 9/11.

The event also included a discussion on North Korea’s recent use of nuclear weapons and the personality of the country’s leader, Kim Jong Un. Monaco dispelled a common characterization of Kim Jong Un as crazy, noting that although the North Korean leader is “exceedingly paranoid and violent,” he is “rational.” She added that just like the U.S., North Korea’s predominant goal is to protect its borders.

Moderator David Schanzer, associate professor of the practice in the Sanford School of Public Policy, also guided the conversation toward the Syrian conflict and the question of who should be blamed for the current state of the country. Monaco outlined the complexity of the situation and said that there is no singular answer for dealing with the civil war. She also applauded President Trump for the airstrikes he launched toward Syria in April, noting that they were symbolic of the U.S. putting itself first.

Monaco also delved into global warming and the extreme weather that has pummeled the southern U.S. in the past few weeks. She explained that the public often only sees a one-story narrative of such disasters, but doesn’t actually realize how much work the government puts into recovery implementation.

Recovery is especially important because it affects how significant the long-term issues will be such as contaminated water and spread of certain bacteria.

The event ended with a 30-minute question and answer session in which Monaco engaged with both audience members and Twitter users who were following along with the live-streamed event. They asked questions about allies to the U.S. and how the current president is dealing with foreign threats.

Students from all walks of life interacted with Monaco, from nervous first-years to established Ph.D. students. Audience members also included a variety of community members who showed up to hear Monaco’s perspective.”


Read the article at the Duke Chronicle site here.

Published in 2018 and Event Summary