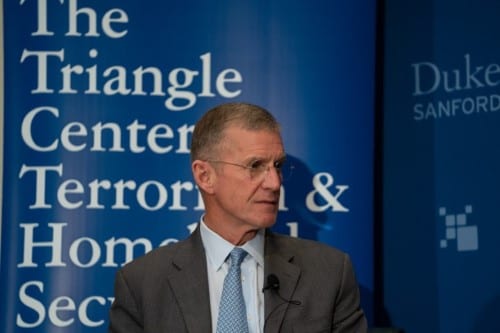 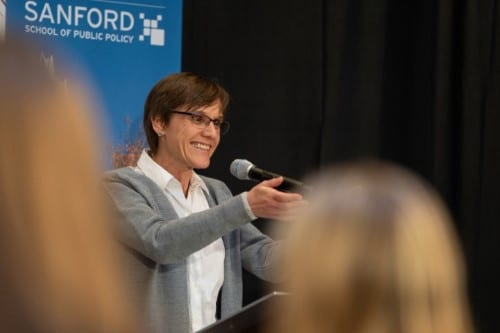 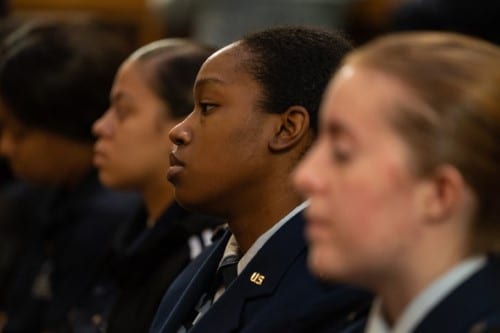 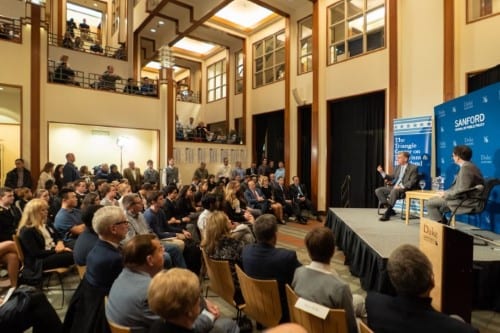 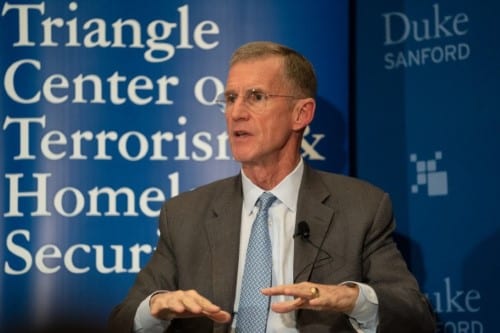 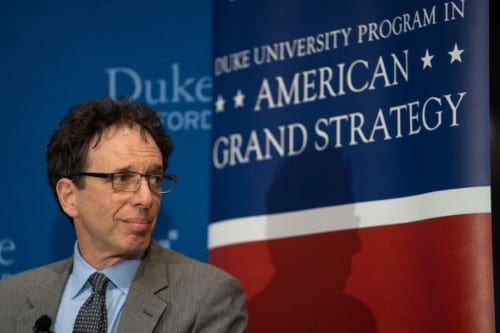 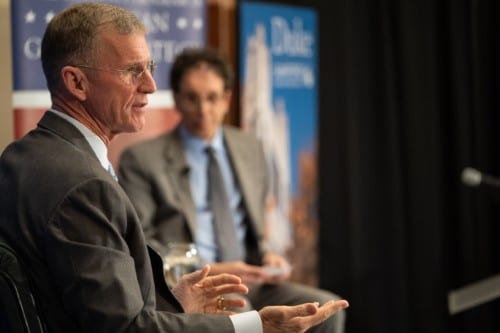 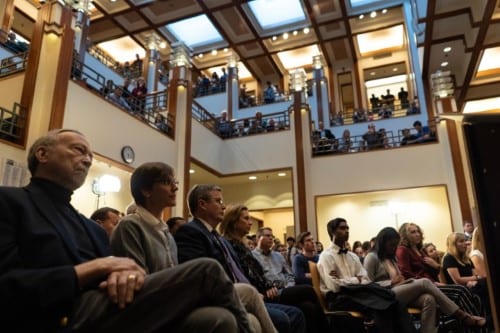 Photos from the event can be viewed here.

The lecture, “Seventeen Years at War,” focused on America’s long engagement in Afghanistan, where despite their current supporting role U.S. service members continue to die. The lecture had been scheduled for the week of 9/11, but was postponed due to Hurricane Florence.

General Stanley McChrystal, retired Commander of U.S. and International Security Assistance Forces in Afghanistan, revolutionized the way military agencies coordinate counter-terrorism efforts. McChrystal led the Joint Special Operations Command, which oversees the military's most sensitive forces. His leadership of the JSOC is credited with the capture of Saddam Hussein in 2003, and the death of the Iraqi Al-Qaeda leader Abu Musab al-Zarqawi in 2006.

As the former commander of the U.S. and international forces in Afghanistan, McChrystal led counter-insurgency strategy and the premier military counter-terrorism force, the Joint Special Operations Command. He started his military career at Fort Bragg in the 82nd Airborne Division. He retired in 2010 and teaches a course on leadership at Yale University.

Schanzer asked if regime change is possible in Afghanistan, and if there is hope for the region.

“It would be hypocritical to criticize -- from this stage in the U.S. -- anyone else’s government,” McChrystal said.

After the Taliban fell in 2001, Afghanistan was a country without a government. The long war with Russia had destroyed much of the tribal culture and warlords stepped in. It was “a destroyed nation,” McChrystal said. It was full of people who had been soldiers for 30 years.

Things are better now, with a government that controls about 65 percent of the country, and the educational system and economy have improved, McChrystal said. But a negotiated settlement is needed, and the Taliban will be part of the process.

In discussing the nature of modern warfare, he pointed out that our ideas of war have been shaped by World War II, which “had a beginning, a middle and an end.”

There was a period when nation-states had a monopoly on weapons, but now the technology of war has been democratized, he said. It is easier for a small force such as Al-Qaeda or ISIS to obtain advanced weapons. Cyber-weapons have lowered the threshold even more.

As in McChrystal’s published editorials and other public remarks, he was sharply critical of President Trump, whom he recently called immoral.

“There have always been politicians who didn’t tell the truth, but if we accept this, we will get into a bad place,” he said. “It’s about morals, and not about someone’s sex life, but our sacred morals.”

“What’s happening now is different. It’s a threat to the basic fabric of our democracy, to the Bill of Rights,” said McChrystal.

“How do we deal with our institutions being degraded?” Schanzer asked.

“Part of it is discipline,” McChrystal said, “both individual and societal. We all have to say this is not acceptable. Tweeting is fine unless you’re operating a motor vehicle or leading the most powerful nation in the free world.”

During the audience Q and A period, a Vietnam veteran asked about the change in military service, from something common to now drawing from a smaller group of people.

While the voluntary military has been a good thing, the military “should reflect the nation,” McChrystal said. The nation is at risk of having a military that is a separate caste, he said, noting that soldiers he led in Afghanistan often were the children of service members he had worked with earlier in his career.

“We need a draft again, but the other side should be civilian service,” he said.

Due to arrest records, physical fitness or other issues, only about 30 percent of Americans can qualify for military service. The other 70 percent could serve the nation through programs like AmeriCorps.

A year of national paid service between the ages of 18 and 22 would give Americans a common experience that they could draw on for the rest of their lives. It should be paid, McChrystal said, so it wouldn’t become something only kids from wealthy families could do.

“We need good people in government,” he said.

The Terry Sanford Distinguished Lecture series is made possible by the William R. Kenan Charitable Trust. This lecture was sponsored by Duke’s Sanford School of Public Policy, the Triangle Center on Terrorism and Homeland Security, Duke’s Program in American Grand Strategy, and the Counterterrorism and Public Policy Fellowship Program at the Sanford School.