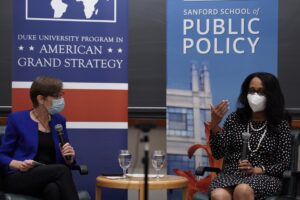 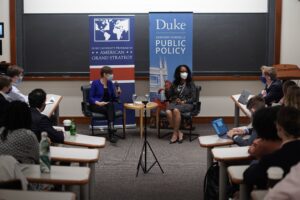 This event was not recorded.

Wyndee Parker joined Sanford School of Public Policy Dean Judith Kelly on Thursday, October 14th for a conversation on the role of Congress in national security. Ms. Parker has served as National Security Advisor to Speaker of the House Nancy Pelosi since 2009. Prior to that, she served as Deputy General Counsel for the House Permanent Select Committee on Intelligence (HPSCI).

As national security advisor, Ms. Parker is responsible for overseeing the activities of all the foreign policy and national security committees in the House of Representatives, and their associated appropriations counterparts. These include the House committees on Intelligence, Homeland Security, Foreign Affairs, and Armed Services. “One of my foremost responsibilities,” Ms. Parker explained, “is ensuring that the members [of Congress] are fully informed when they make national security decisions.” As a result, much of her job involves discussion with executive branch departments, agencies, and the National Security Council in order to relay necessary information to Representatives.

In responding to questions from Dean Kelly, Ms. Parker noted her belief that the top national security threat was China. “We know that China has serious ambitions, and they do not want us to interfere,” she elaborated. “The US has a responsibility to make sure that every nation is aware of the consequences of involving themselves with China.” She also mentioned cyber ransomware attacks, domestic election interference by foreign governments, and nuclear ambitions of hostile states as other top threats.

As the conversation turned towards Afghanistan, Ms. Parker drew on her personal visits to the country as well as the events of the past months. “We knew that the drawdown was something that had to be done,” she explained, “We could not stay there forever.” However, Ms. Parker also mentioned her conviction that the United States was obligated to help evacuate vulnerable people on-the-ground, including interpreters, contractors, and support staff. The legislative branch was critical in this effort, she explained, with dozens of members of Congress and their offices personally arranging the evacuation of thousands of people. Looking to the future of the use of military force, Ms. Parker stated, “when we are talking about ‘new AUMF’s’, there need to be some limitations; it needs to be more targeted and have a definite duration.”

Other topics of conversation included the role of media in national security, the reported conversations between Speaker Pelosi and Chairman of the Joint Chiefs of Staff General Mark Milley following the election of 2020, and the power of the minority party to perform oversight of the executive branch. To conclude, Ms. Parker encouraged AGS and Duke students to take full advantage of the numerous opportunities available to students in order to effectively pursue their passions.