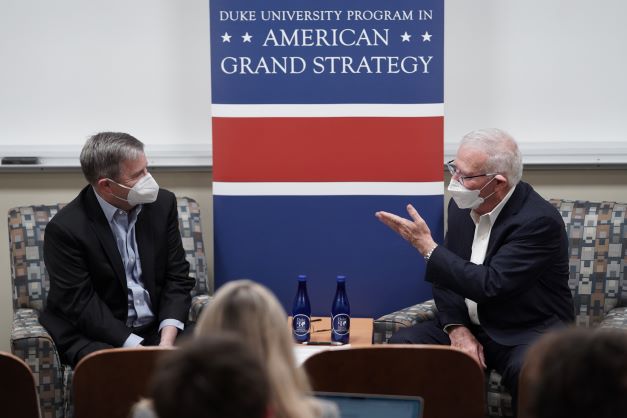 This event was not recorded. More event photos available on the AGS Facebook page.

On January 26, Amos Yadlin, former Major General of the Israeli Air Force, joined Professor Peter Feaver to speak to AGS about his celebrated career at the top of Israel’s military and politics. He dedicated a large proportion of the lecture to Iran, covering the main strategies considered by his colleagues at the time to stop Iran from acquiring nuclear weapons. He then recounted two top-secret missions which he helped lead and plan. On one mission on June 6, 1981, known as Operation Opera, Yadlin piloted Israeli planes from Eilat to Baghdad, where he was spotted by King Hussein of Jordan on his yacht, and succeeded in his mission to destroy Iraq’s nuclear reactors.

General Yadlin highlighted another operation, in June 2007, occurring when Syria had disguised their nuclear facilities with the same model as North Korea, yet apparently only ten people in Syria knew about them. Israeli politicians wanted to attack, but the U.S. cabinet was against it, wanting instead to go to the United Nations Security Council. In the end, Israel successfully attacked with only two planes, hoping the operation would be limited so not to embarrass Assad. General Yadlin mentioned other accounts of his experiences serving as a senior military official.

Finally, General Yadlin addressed the current predicament with Iran and the JCPOA. While Netanyahu had likened the JCPOA to the Munich Agreement of 1938, and President Obama had said it was the best possible deal at the time, General Yadlin found it to be somewhere in-between these two points of view. While he expressed the deal as being overall good, he said it would only last ten years and that it spoke nothing of the long-term future of Israel-Iranian relations. In addition, former President Trump and Prime Minister Netanyahu had now accelerated these 10 years to only three years, which Yadlin expressed as a major threat to contemporary Israeli national security.