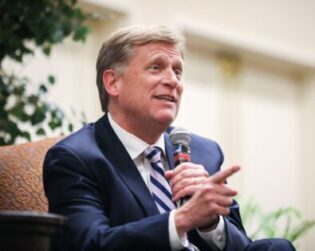 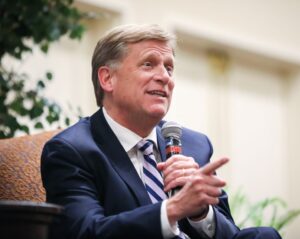 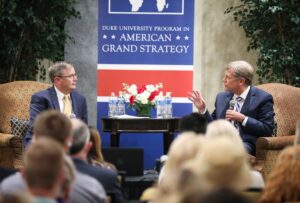 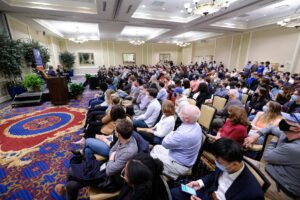 Watch a recording of the event here.
More event photos on the AGS Facebook page.

On Tuesday, March 1, Ambassador Michael McFaul, former U.S. Ambassador to the Russian Federation, joined Professor Peter Feaver in a discussion regarding the events unfolding following Russia’s invasion of Ukraine and the future of the U.S.-Russian relationship. The discussion centered around Ambassador McFaul’s perspective and insight on Russia’s, and more specifically Vladimir Putin’s, motive and goals. Ambassador McFaul referenced his time spent in Russia and personal interactions with both Putin and other advisors, and he also acknowledged how his current roles as a professor, news analyst, and newspaper columnist have allowed him the ability to more freely speak his mind and advocate on behalf of the Ukrainian people. The interview began with the Ambassador’s views on the current situation and what led to it. He greatly emphasized the importance of the Ukrainian people and their pride for both their leadership and the brave soldiers fighting for their country. Putin’s initial plan of attack and preconceived timeline failed, according to Ambassador McFaul because of the bravery and strength of the Ukrainian people and President Zelensky’s leadership.

The talk discussed the current state of the war in Ukraine and the Ambassador made it clear how this was a different kind of war – with Russian forces attacking and killing civilians on purpose. He identified this as part of Russia’s goal to force Ukraine to submit and to take over major cities such as Kyiv so a Russian puppet could be inserted as a new leader. He then discussed the immediate future of the war including Russia attacking from new angles and the incredibly skewed power dynamic of the Russian and Ukrainian militaries. Specifically, he noted Russia’s strength in air warfare and the weakness of Ukraine’s ability to defend against rockets and planes. He then transitioned back to discussing the mindset of Vladimir Putin and what spurred these actions in the first place. He spoke about Putin’s perspective being incredibly fixed because he had become so used to winning wars and his exceptionally long reign in power has led him to ignore his top advisors. Ambassador McFaul also mentioned how, at this point, many of Putin’s advisors no longer respect him but they do fear him.

Ambassador McFaul then talked about the importance of understanding Russian society, specifically with regard to the media and the news. With his roles as a news analyst for NBC and columnist for the Washington Post, Ambassador McFaul is uniquely qualified to understand Russia and this field. He mentioned the common folklore in Russian society about “passive, soft Ukrainians” and how the Russian news outlets pump out propaganda supporting Russian superiority and deeming Ukraine a failed state that has been taken over by Nazis. Ambassador McFaul emphasized how important it was to understand this image that has been promoted throughout Russia – specifically to Russian soldiers from non-major cities who have never heard anything but this propaganda. Due to Ukraine’s free media, emotionally charged stories from soldiers and citizens have been heard around the globe.

The talk then shifted to discuss NATO and the current actions taken against Russia from the international stage. He mentioned how Putin did not expect that the US and Europe would go this far in terms of the current sanctions, and many of Russia’s prominent oligarchs have already fled. He noted the relevance of broad sanctions that affect the entire nation rather than a targeted sanction that would not deter Putin. He also mentioned how Putin’s current actions have diminished any of his deterrent power over the West. Ambassador McFaul also refuted Putin’s argument that it was NATO expansion that incited the current actions. He then proposed that it is not NATO expansion, but democratic expansion that Putin finds threatening and which has spurred his visceral and individual reaction. Ambassador McFail was an incredibly enlightening guest who holds unique wisdom and insight on these topics, and he graciously shared his perspective and thoughts in this talk.