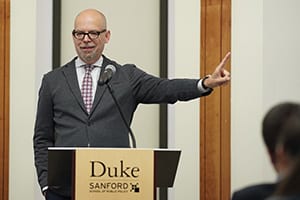 Dr. Logevall began the talk going over the challenges Kennedy faced to democratic leadership. His handling of the Cuban Missile Crisis and arguably the peak of the Cold War was heavily influenced by his ability to empathize with others. Kennedy could see both sides of a situation and make compromises even in such difficult cases as an impending nuclear war. He played two XCOM tapes illustrating JFK’s ability to take in information from his advisors and interpret it for himself, sometimes actively going against the advisors’ interpretation. The Professor then went on to discuss political leadership through Kennedy, drawing parallels between the President’s empathy and bipartisanship. Dr. Logevall concluded the discussion with JFK’s call to public service. This idea was instilled in Kennedy and his siblings from a very young age, and his parents especially promoted the idea of serving a force larger than themselves.